"Happiness is a place". It was a mixture of magnificence and mystery that attracted me to Harrow Bangkok's first ever expedition to Bhutan.

Bhutan: The Land of the Thunder Dragon. The last Himalayan kingdom, where ‘happiness is a place’. The connotations of Bhutan brought a mixture of magnificence and mystery that immediately attracted me to Harrow’s first ever expedition to Bhutan. For eighteen students and two teachers, Saturday 3 to 10 February 2018 was a week packed with unique culture, nature and, of course, pictures that we will take away for life.

Flying into Bhutan, we could not have asked for a warmer Bhutanese welcome. Right from the beginning, we were greeted by the breathtaking view of the mountain summits as we descended into Bhutan’s only international airport, nestled between the lush green valleys of Paro. Upon our arrival, we were met with “Welcome to Bhutan!” from Sonam, one of our tour guides, offering the traditional white khada scarfs for everyone. Already making an extraordinary first impression, we were all eager to explore as much of Bhutan in the seven days we had: Punakha, Thimphu, Paro. We had quite a week ahead of us.

Our first official stop was Punakha. The drive to our destination was the most interesting car ride as we witnessed the lifestyle of the Bhutanese people from the very windows of our vintage van. There is nowhere else where culture is so pristinely preserved and valued by the law than in Bhutan. Everywhere, men and women were in their national dress: the knee-length gho for men and the ankle-length kira for women. Buildings with traditional Bhutanese architecture dominated the landscapes. There was a whiff of the past when we were lucky enough to watch a local archery competition, Bhutan’s national sport. Local victory songs resonated in the air every time an arrow hit the wooden target. Chimi Lhakhang, a fertility temple, added great character to our walk through a local farming village at Punakha valley where farming terraces outlined the clear sky. It was not just culture that is preserved, but nature is also carefully treasured. We were up close and personal with Bhutan’s natural wonders as we crossed Bhutan’s longest suspension bridge and rafted down the Mo Chhu River. The river was definitely deserving of its name as we experienced first-hand the churning ice-cold rapids. Finally, we would not be in Punakha without visiting the impressive Punakha Dzongkhag.

Thimphu showcased a new dimension to Bhutan. The juxtaposition of urbanisation and tradition was one of the most striking qualities of this capital. The experiences of meeting the monks in their maroon robes at Pangrizampa Astrology Institute, hearing the nuns chant their evening prayers at Zelukha Nunnery, and strolling around the National Memorial Chorten, had demonstrated that Thimphu has managed to retain its rich culture in the wake of urbanisation. Immersing ourselves in Bhutanese culture, we tried on the intricately designed ghos and kiras before delving into some Bhutanese cuisine along the streets of Thimphu, including the delicious Momo dumplings that had us begging for more. On the other hand, we also saw a more industrial aspect of Bhutan, learning at the water management site that Bhutan looks to improve the quality of its water and invest more in hydro-power, while the Tourism Council of Bhutan is hoping to expand tourism in the smart and sustainable ‘high value, low impact’ approach. Furthermore, a tour around Draktsho Vocational Center for Special Children and Youth left us in admiration of how this organisation is making such a big and positive difference to the lives of the children they look after and we are all keen to see where it continues in the future.

After seeing the urbanised side of Bhutan, we went back to nature with our trek to Premula, where we saw how blessed Bhutan is with its beautiful natural scenery. With lots of memories and pictures captured along this mountainous trek, we spent the night camping under the starlit sky before returning full circle to Paro for the last few days of our expedition. At Paro, everything we were learning about Bhutan throughout the trip was reinforced at the National Museum of Bhutan. Some of it was later brought to life as we saw the Bhutanese cultural show and even had a chance to try a bit of archery. Then, there was nothing better than to end the trip with the Tiger’s Nest Hike. Our two-hour hike was rewarded with the stunning view of Paro Taktsang by the cliffside, where the iconic colourful prayer flags hung against this photogenic background, flapping against the gusting wind. We could not have asked for more!

From Punakha, Thimphu to Paro; every day was a new adventure, a new dimension to Bhutan. Each city had its own character but there was one thing in common: the people’s universal smiles and friendliness that greeted us everywhere we went. Our guides, Sonam and Yeshi, were the very examples of this endearing hospitality. This expedition has truly been an enriching and eye-opening experience. It was inspiring to witness how a country can have such a strong and distinct identity. Visiting Bhutan was like stepping into a time capsule. An encapsulation of timeless beauty, culture and heritage. Though our seven days have merely scratched the surface of Bhutan, all of us from Harrow Bangkok have certainly taken away some remarkable memories. A massive thank you to everyone who made this once-in-a-lifetime expedition possible. Thank you to the people of Bhutan for proving that happiness is indeed a place. 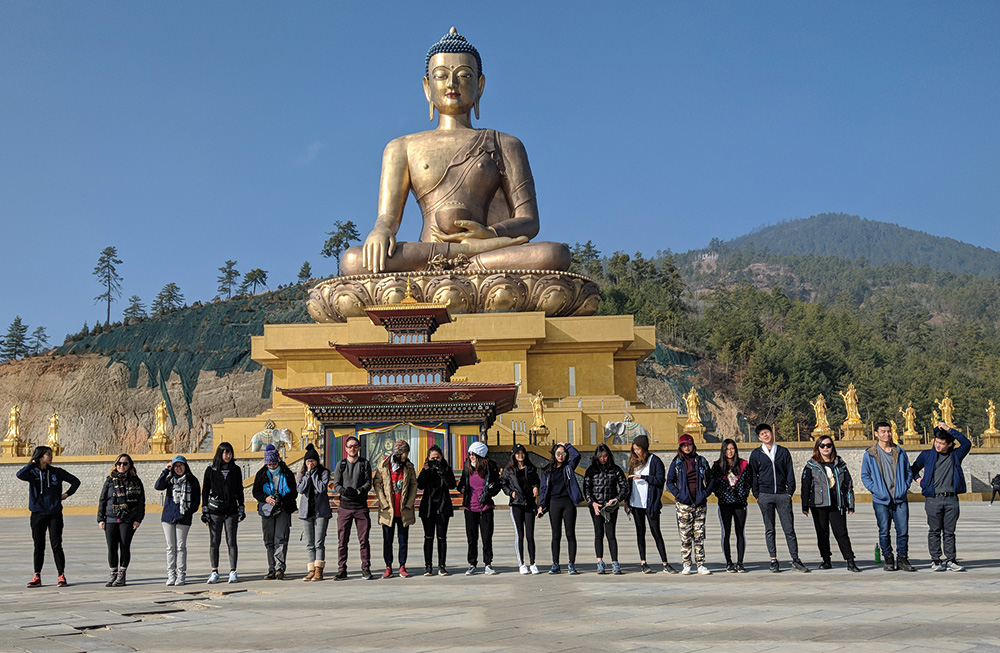