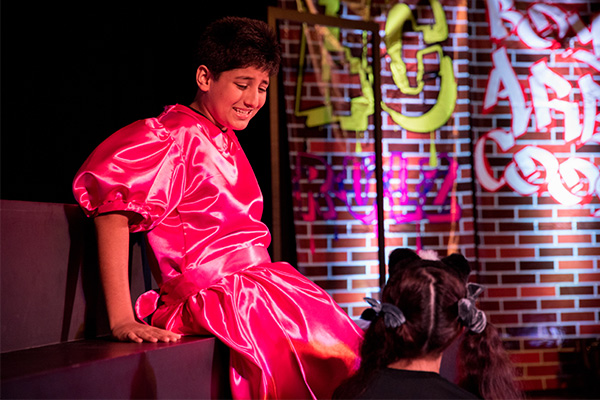 On 19th June, students from Year 6-8 performed their adaptation of Anne Fine’s play ‘Bill’s New Frock’. Along with some of the original script, the students also wrote new scenes to bring the play into the modern era. Preparation for the play took four months. All cast attended weekly rehearsals and also gave up time on a Saturday. All the hard work paid off, as the final show was extremely professional and entertaining and was very well received by audiences. The play follows the main character, Bill, who wakes up one morning to find his mum is sending him to school in a bright pink dress! Throughout the day, Bill experiences what school is like for girls and he finds out that there are some interesting differences between how boys and girls are treated. The play was intended to make the audiences think about their own lives and experiences and hopefully help them to consider the equality of genders in and out of school. The cast showed great energy, passion and skill throughout the performance. As well as acting, there was also live music played by the cast during the play. The students definitely showed off their creative skills and also demonstrated some of the excellent art that can be achieved in our new Creative and Performing Arts building.

Out of 126 submissions from 21 countries, Rena from Year 13 won the First Prize (High School Category) in the Exploring Youth Identities Competition, which was organised by The Union International, Thailand’s first interscholastic student-run newspaper.