Alumni Pearl Rojanapeansatith met with President Barack Obama when he visited with the University of San Fransico (USF) women's golf team at the Olympic Club golf course. President Obama was at the Olympic Club to play a round of golf. He stopped to talk to the team, asking them how they were doing and getting some tips on hitting shots. He even donned Pearl's USF visor for a team photo!

He was a really kind and inspiring person" says Pearl.

Pearl graduated in 2017 after studying at Harrow Bangkok for more than 13 years, She now studies Entrepreneurship and Innovation at the University of San Fransciso where she has a full golf scholarship.

Pearl's team is practising to compete in their last tournament of the semester in Las Vegas. The team rankings have been released and USF ranked 69th in the nation for the National Collegiate Athletic Association (NCAA) Division 1. On an individual note, Pearl has had a great semester so far, finishing top 4 at the Colorado State Tournament.

She is looking forward to her last 18 months at USF where she hopes to achieve further golfing accomplishments as well as completing her studies. 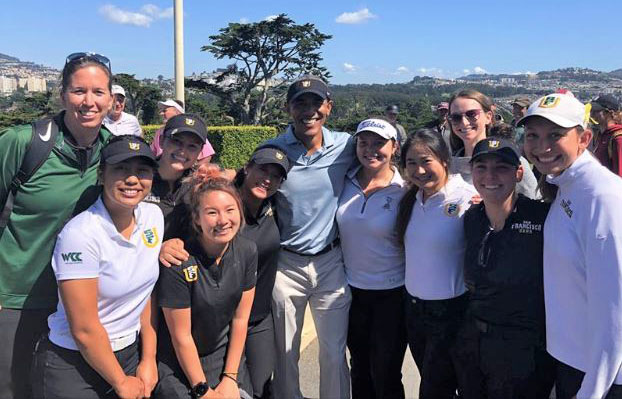 PEARL AND THE USF GOLF TEAM WITH PRESIDENT OBAMA