The Harrow Bangkok LionView Production team have won their first ever international film competition. Four incredibly talented students from the Upper School achieved this unique feat by winning the ‘Cut Films Best International Award’. The Year 11 students Kawin (Logic) Leephakpreeda, Pakkapol (Book) Lailert, Aphicha (Ajay) Watanakun, Napat (Keen) Burapath produced a fantastic film which they entered into the prestigious Cut Films awards which aims to discourage young people from smoking through the medium of film. The glittering award ceremony took place at the Curzon Cinema in Soho, London. Media and LionView Productions is led here at Harrow Bangkok by Mr Simpson, who with his wife, also a teacher at Harrow Bangkok, Ms Ta collected the award on the student’s behalf. Their film can be seen here.

‘Having now been at Harrow Bangkok for one year, it is clear to me that the students here are exceptionally talented in the realm of filmmaking. These four incredible students produced a beautifully shot, carefully crafted film with a subtle, yet haunting narrative that was loved by the judges. At the screening event in London, it was one of the films that really stood out and the students should be extremely proud of themselves, as I am of them. They can now call themselves award-winning filmmakers and I am hoping that this is just the start. They have now opened the door for all our students to believe that they can also win these international awards and be the next Harrow Bangkok award-winning filmmakers. If you are interested in getting involved find me in R102 or the new TV Studio’. 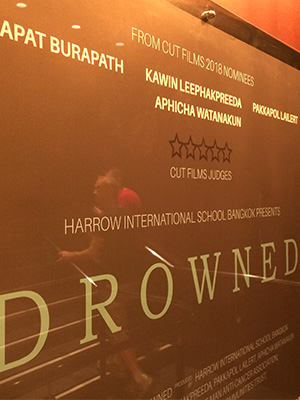